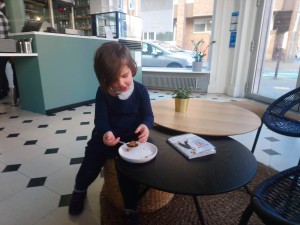 As I was watching her eat, I suddenly realized that my baby was no longer a baby.

She now speaks, in fact, repeats new words and phrases over and over again, loudly and with attitude. Last month she learned “laisse moi tranquille.” She doesn’t sing it like Serge Gainsbourg: “laissez moi.. laisszez moi, tranquille, laissez moi”. Instead, using her index finger, she orders that I leave her alone. When I do, she shouts seconds later: “mama, where are you? Please come back.”

It’s hard for them, and it’s for her. Like other kids her age, she doesn’t know what she wants. She wants to be alone, but she also wants to be with me – but then a second later she remembers that she wants to assert her independence. She’s at a phase where she wants to do everything on her own including crossing the street and cutting an apple not with her pink small knife but with Mama and Papa’s knife.

She’s also at that delightful ‘no’ phase.  She says no – in fact screams it “non”– way too often, especially in quiet areas like the library. By refusing to leave Wazemme’s Bibliotheque, she believes she’s standing up against parental oppression. It’s a testament to her independent, strong spirit, I try to comfort my exhausted self.

Sometimes I’m able to stand my ground, but other times, she just wears me down. It’s not just me though but even with others. One day a boy at the playground didn’t want to play with her because he said she was in a different class. It was his diplomatic way of telling her that she was too young to play with him. Despite that convincing argument, and despite the fact that he was at least three years older than her, Lilia hovered over him until he finally agreed to play with her. During the game, he told her that she wasn’t strong enough for football. “Si,” she said and kicked the ball the wrong way. She preempted his critique by saying: “la la la lere; ma maman est plus forte que la tienne”.  I sincerely doubt that I was stronger than his mom, I haven’t been to the gym since 2014, but it made me happy that she saw me that way. That I was, in fact, her superwoman.

I’m grateful for these moments. Especially the ones that make my shoulders shake from laughter. But of course, it’s not always easy.  Parenting is damn hard.  The hardest thing I’ve done in my life – and she’s not even a teenager. She doesn’t just test my patience, sometimes she makes me want to stab myself in the eye. The tantrums make me wish I could dig a hole and hibernate in it until she turns 18. But then, there are these precious moments that erase my memory. Lilia’s laughter, her sense of humor, her hug, her raspberry scented mouth, and her soft kissable cheeks make me forget that just minutes ago I was about to stab my self in the eye while hiding in a pile of dirt.

To survive parenthood, we embrace selective short-term memory loss. We delete the bad and devour the good. Parenthood is truly the most fascinating experiment of living in a constant state of euphoria and emotional turmoil.

Parenting is like rolling in a pile of raspberry scented mud. It’s wet, thick, and soft with hard bits.

View all posts by Atiaf

6 thoughts on “Lilia in Lille”